Judobots - It's About the Process

I came across an activity back in the fall for creating and battling Judobots; primitive robots built out of craft sticks, wooden blocks, skewers and held together with glue sticks and tape. (Amazon book) This structure becomes robotic when you add hydraulics made from syringes and tubing. (see image below) The idea would be for students to design and build a Judobot and then battle another team in a best 2 out of 3 type tournament. Whichever Judobot was able to knock over or out of a 12"X12" area would win and advance in the tournament.


I approached a 6th grade STEM teacher about collaborating on this project. He really liked the design aspect of the project and agreed to have his classes participate. I got all the materials ready and he created 3-4 member teams. We showed them my model, explained the workings of hydraulics and handed out criteria for the robots. The students were shown a video of a battle between 2 Judobots and teams discussed how they wanted to approach designing their Judobot.

The classes would meet in the media center where design and creation would take place. Glue gun stations were set up along with a cutting and drilling station. Each robot base had to fit in a 12"X12" frame in order to level the playing field. (enlarging the base would lead to making it more difficult to tip over)

Once the Judobot was built, students would then add the hydraulics in order to be able to move the arm vertically and horizontally. Once the Judobot was functional students began competing in a preliminary round robin type tourney to gauge how well their design worked. Afterwards teams were able to make modifications before the actual tournament.

I was amazed at the conversations the teacher was having during the design and creation process with his students. He had then drawing back from lessons learned back in fourth grade math in order to solve their problems. Students discussed ideas with one another and considered everyone's opinions prior to moving forward. It was truly STEM.

Reflecting on this activity with the STEM teacher we both agreed it was a worthwhile activity. He came up with the idea of pricing out all the equipment and giving each team a budget in order to have them decide how they would want to spend their budget. We discussed allowing them opportunities throughout the process to earn chances to increase their budget to purchase items that may enhance their Judobot.

I look forward to our next opportunity to do battle and may even consider having a teacher team design and create a Judobot to do battle with our student champions. I'm certain students would relish the chance to defeat their teachers in battle!

Check out this video created by the teacher about the process - http://safeyoutube.net/w/VfIc

Posted by Unknown at 7:37 AM No comments:

I'm going to state this publicly so perhaps you all can help keep me to this; I'm going to begin a monthly blog. I've struggled to make time to blog in the past, but hopefully my reasoning will help me to be consistent. The purpose of these blogs will be to historically document the things that are happening in my media space, as well as, gain feedback from you experts to help me improve my practices. So here goes...

This past December teachers began talking about how they were going to address their students participating in Hour of Code. I worried students would be asked to turn to their iPads and access apps or sites for an hour and teachers would then check off their "Hour of Code" box. No fault of the teachers here, they have never received any training regarding Hour of Code. They also need to address new technology standards, which again, they have not received any training on. In the past I have also heard students, who were way past spending time on the Scratch programs, complain that they have done this same activity year in and year out.

I wondered how I could play a roll in giving our students a fun, engaging Hour of Code experience. I took inventory of the amount of codable technology I had procured in recent years and felt I had enough to create stations throughout the library. Using Dash and Dot, Spheros, Sphero Minis, Ozobot, and Bloxels I was able to create 20 stations. All activities were found online and some were tweaked to meet our needs.

The goal of the first four stations was to code a Sphero to roll forward and land on the highest number possible using a rug created for marbles. Students took turns coding their Sphero and attempted to either land on a high number or knock their opponent off.

At another station students were asked to code Dash to free Dot from containment. 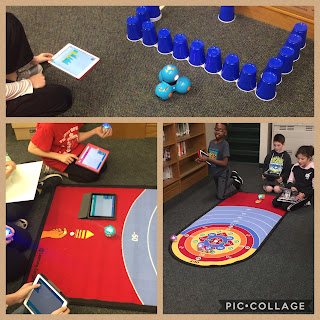 Using Ozobots and small bowling pins, students attempted to code their robot to drive around the board and knock all the pins down. 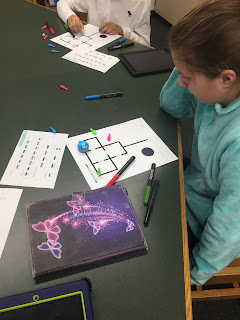 Students really enjoyed coding Dash to drive around a basketball court and launch balls into a basket from 3 different marked locations. 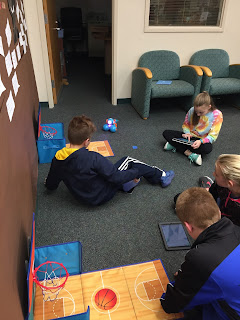 With the Winter Olympics approaching I thought it would be a good idea to introduce the students to one of the events by having them code Mini Spheros on a mini Curling game board. The goal was to code your Mini Sphero to land as close to the target as possible.

Using the xylophone accessory, student DJs entertained the rest of the class by coding Dash to play tunes.

I wanted to introduce students to a unique type of coding through Bloxels. Once they created their object/character/scene they used their iPad camera to scan the image into their game. 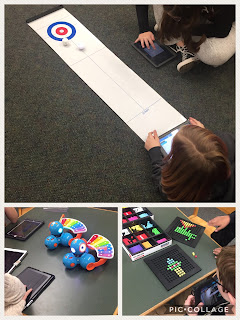 Finally, I created 4 miniature golf course holes around the media center. Students coded a Sphero to drive around obstacles to land on the hole. 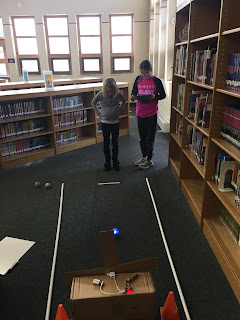 To prepare students for the event videos directions were shares prior to their visit along with a list of apps they were to have downloaded.

I received great reviews from both students and teachers, some even taking the time to share their appreciation through cards and signs. That was proof enough that I should continue with this event and continue to develop it as well.

The next hurdle will be to get these devices into the hands of students either through their content area teachers or allowing them to checkout the technology to use at home. Numerous students returned asking when they will do this activity again and many were willing to give up their lunch/recess to learn more about coding. Time to leverage this enthusiasm!